BNA Review, And Why Trigger Frustrates Me | Seventh Valkyrie Reviews #4 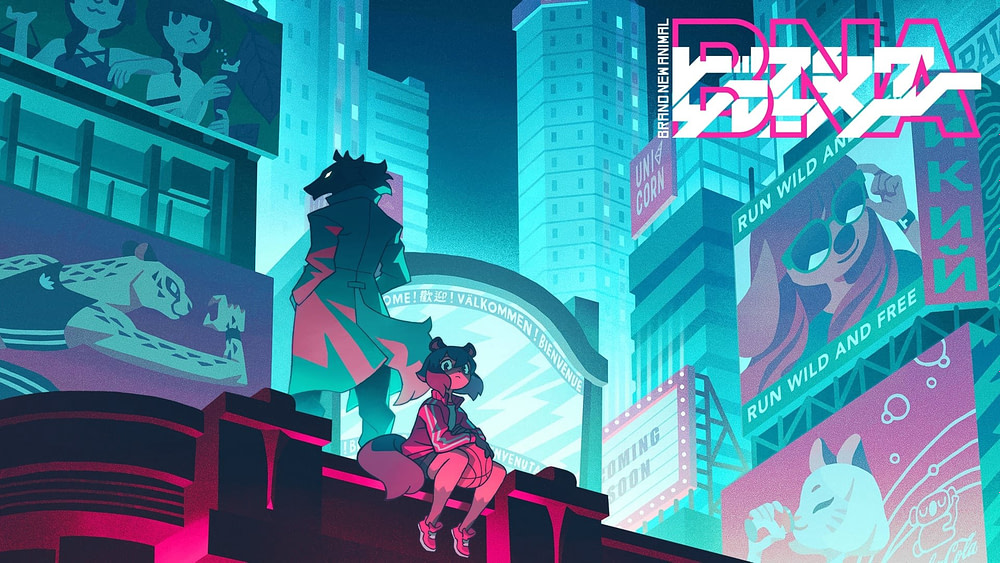 Hello there and welcome to another edition of Seventh Valkyrie Reviews! In this episode, as you might guess from the title “BNA Review”, we’re going to be reviewing BNA: Brand New Animal.

This anime is by Studio Trigger, who I tend to love. As the spiritual successor to Gainax, their two most recent projects I can think of are Kill la Kill and Darling in the Franxx, continuing their reputation as a studio you can always count on for the batshit crazy creative side of anime.

And they definitely deliver that here with Michiru, our hero, as she finds herself turning into a hybrid transforming animal person in an alternate reality where there are some major tensions between humans and beastmen.

Along the way, she meets Shirou Ogami, a seemingly immortal wolf person with a mysterious past, and together they uncover a secret that’ll threaten the fate of all Anima City.

So, onward into our BNA Review!

Not a perfect show, but you can always count on Trigger to deliver some balling animation

Getting right to the point, BNA gets a 4.5 out of 7 for me. With all honesty, I’m a huge fan of Trigger. Their animation is fantastic, and the worlds that they create are always so rich, vibrant, and well brought to life.

When I think of shows by Trigger, I always think “fun”, and this show was definitely imaginative and fun. Still, there were some major issues with this show to me

The constantly changing stakes kind of confused me, and the central mystery and plot felt kind of all over the place. As a result, I got to the end and I felt like the series had sort of fallen flat.

If I could split BNA into two shows, I’d rate it 6/7 followed by 3/7, as the latter half of the show didn’t really pay off the beginning.

Hence the 4.5 out of 7. I tend to weight a satisfying ending pretty heavily, especially if I like the beginning.

What BNA Does Right

BNA does a lot of stuff really, really right. You can’t talk Trigger without calling out their classic animation style. It’s fun, it’s high energy, it’s super colorful, it’s everything that popcorn anime can be.

The opening was pretty catchy and the ending was chill, which are both fundamental to a good anime. Not breaking any records, or kicking onto my top lists, but definitely not shitty.

BNA also has some incredible individual moments throughout the series that really stuck with me.

I keep coming back to the baseball episode, and it has everything. Crazy powers, competition, and tension, high stakes, the interplay of crime and society, questions of class and race, betting, disappointment, violence, twists and turns, all turned up to eleven.

It’s everything that Trigger does right, and a legitimately fantastic episode full stop.

The first half of the show does an excellent job exploring the world. They raise some really interesting questions, never present anything as being super straightforward, and they opened a door into a fascinating place.

Coming off of that baseball episode I was really expecting something fantastic.

You’re gonna have to pardon the frustration, but the second half of the show, when the overarching plot comes together — or tries to — it just becomes a clusterfuck!

You’ve got people turning from good to bad and back within the same episode, you’ve got constantly changing stakes, and I think I counted three times where “it was all explained” that ended up getting totally reversed by “no seriously this time” followed by “third time’s the charm, we promise”.

I was confused too Michiru

Now, I’m totally okay with misdirects, with secrets, but don’t spend 5 minutes of exposition that’s just explaining something that we’re gonna see not being true later in the episode. You’re wasting my time for a reveal that’s not even landing!

Combined with some other things that didn’t land for me (including the concert and the final fight), I just felt like all that good energy fizzled out by the end, and that soured me on the show.

I’m a huge believer that endings can absolutely ruin the things that came before them. Look at Game of Thrones. No one’s rewatching the show now because of how awful and unsatisfying the end was.

So ultimately, BNA was a fun, colorful, imaginative, anime with a compelling start that just didn’t quite pay off.

And now we go from my BNA review to my Trigger rant.

Okay, here’s my problem with Trigger. I love them, and they can suck me into a world in a flash.

But between BNA and Darling in the Franxx, I’m starting to believe they have absolutely NO IDEA how to end a series in a satisfying way!

Now Kill la Kill is different, because that show was less about the character development and more about the insane action, and they just did the old Gurren Lagann effect of raising the scale until the fate of the universe was in balance and play it out.

Yes, that is a galaxy-sized Gurren Lagann robot

But here’s the thing about BNA and Darling in the Franxx. They had such compelling, character-driven, and subtle beginnings. You opened all these doors, added such texture to your characters, and then you just smush them all together into a clusterfuck at the end.

Here’s what BNA and Darling in the Franxx did wrong. They started out with complex characters on emotionally gray journeys. They raised moral questions, they opened up a sense of diversity and mystery, they explored between the lines.

But then, they went with their usual ending formula (giant set piece, epic battle for the fate of everyone), and threw away everything before it!

In Darling in the Franxx, they turned everyone into less than caricatures, took away everything that mattered about them to focus on the big ending battle. And it sucked.

In BNA, they kind of did the opposite. They tried to force all these characters into roles that fit for them during the final battle. But the end result was needlessly convoluted and practically impossible to follow.

Even worse, you still ended up with characters that felt sort of sanded down into smooth blobs.

Look, if the story is simple and crazy, keep it simple, and go freaking crazy. But if you’re going to put all of this effort into setting up a table and a beautiful dinner, just to flip it over and detonate a paint explosion, it gets frustrating.

So as we wind down this BNA review, the question remains: should you watch BNA?

Eh, maybe? Ultimately, it’s a fun ride that ended in a fever dream of an ending. For me, it actually was a fever dream, since I had a 104.5-degree fever at times watching it.

If you love Trigger, you love the journey, and you’re okay with an ending that hits the beats of the classic Trigger formula without quite nailing it, then sure. I wouldn’t put it at the top of my personal watchlist, but you could definitely find a whole lot worse to watch.