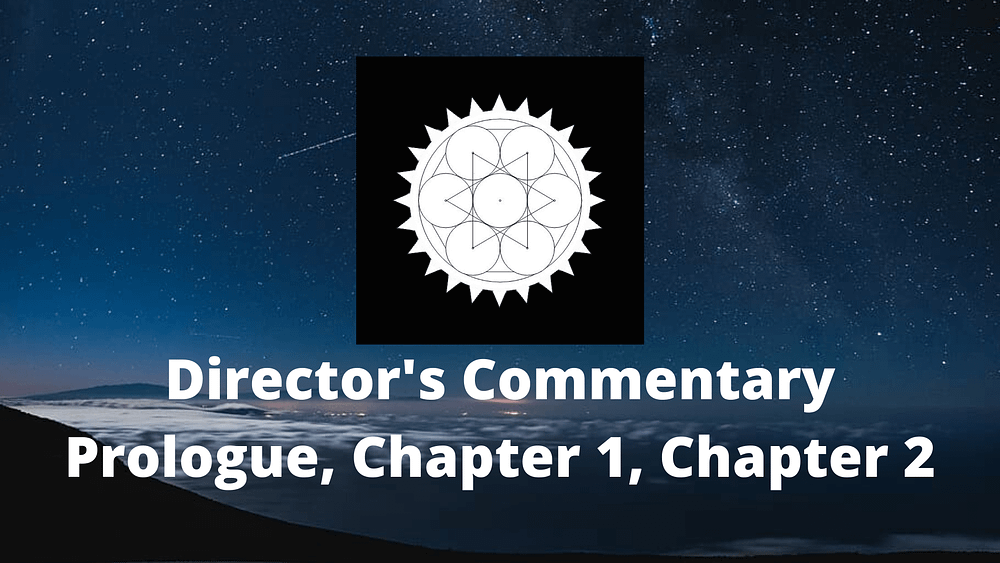 And welcome to week 1 of the Seventh Valkyrie read along and director’s commentary, accompanying the launch of A Slanted Reflection.

You can watch the video version of this blog below. I go into quite a bit more detail in the video, but she’s a doozy (about 30 minutes).

This is our first one, so we’re gonna go over a little bit of the format. First off, new readers beware! I’ll be going over spoilers like nobody’s business, and giving you the inside look behind the scenes of A Slanted Reflection. Fun if you’ve read the chapters! Less fun if you haven’t. So there’s my warning!

I’ll be doing three chapters a week, and starting next week I’ll be posting midweek on social media looking for any questions that I can answer.

For this week though, we’re starting with the Prologue, Chapter 1, and Chapter 2.

A Long Time in Development

Okay, first off we have the prologue, where we meet BC, who you may have been introduced to in the Volume 1 preview. Not much difference here from that original chapter in terms of events, but the style changes a whole lot if you look at the two. Between when this chapter was written and when it finally came out was almost 3 years, which is probably the longest gap in 7th Valkyrie history so far, and I definitely continued to evolve as a writer throughout it.

That’s something I’m proud of, and actually excited to see over the course of the series. There is an overall plan, but the more I write and mature as a person, the better I get, and I think the new version is great.

An Introduction to BC

After not much BC in Volume 0, it’s great to have some of her here, and I’m not gonna lie when I say that she was one of the hardest characters to finally get right. Ever since the series started 8 years ago I have known exactly what she was to the story, but it took me a very, very long time to figure out who she was. I think part of that was being a teenage/early 20s boy, and we have very little idea how women work and function. Happy with how she’s turned out as a complex, textured character, and you can thank all of the wonderful and interesting female friends in my life for that.

Welcome to the Old City (Not So Much A Fantasy)

As for the Old City of Rene, we’ve got a very interesting place that should evoke the image of Amsterdam and Cinque Terre (bonus points if you saw that on the cover). Everything in the Seventh Valkyrie draws a kernel from the real world, and what I love about the Old City is that outlaw spirit, where sex and substance are just sort of… normal. Sure, everyone loves them, but there’s also a dirty, mundane, and a little bit negative aspect to it that’s fun to play around with.

Velvet, the access road, and the pit were all inspired by some of my favorite places in the world to party. I’ve had a few adventures in my time through some very colorful places of sex and substance, and if you look closely enough, it’s always fascinating to see the reality once we get past the fantasies. Well except this is an actual fantasy.

In terms of voices, this chapter actually also tops out so far for most different ones for Volume 1, and I liked the fact that each of them are pretty unique. Having a character voice usually comprises three elements — accent, pitch, and personality — and the Pit makes that pretty easy.

And the Gears Begin Turning

And finally, as the night winds down, we have the start of BC’s adventure, and all three of our heroes are off on their adventures! The Machine King is coming for her. But why? Find out later in the book.

Chapter 1 — Into the Wild

Chapter 1 and the Prologue both pick up directly after the end of Volume 0, and we get the second piece of this with Cyrus on the run into the Western Expanse, sprinting away from the forces of Edara into a deeply powerful forest. We get two glimpses into the world beyond Edara here, contrary to Volume 0, and we get to see that there’s a reason that the Edarans are afraid of the forests, and the powers against them.

This chapter was also a real glimpse of raw emotion for Cyrus. When writing this one, I got really deep into Cyrus’s feelings and thoughts, and I really tried to capture that as best I could. In the audio version, I think you really get another level of his panic and anguish. He’s been on the run, he’s getting beat down over and over again, and it’s crushing him.

The Beauty of the Wild

The stag scene… that one just came to me. I have a deep awe and respect for nature, for the great and colorful wondrous creatures that exist beyond civilization, and that’s intrinsic. It goes back to before I was even a writer, and it’s something that you should expect much more of in the series. Animals, creatures, I love them.

Voices in My Head

And then finally we have the return of C, our lovable bastard of a voice. Cyrus and C’s interactions are one of my favorite things to write and voice, and they just fly off the page and click like nothing else when I’m writing. I had a good friend of mine read the first chapter with C, look me up and down, and go “ah, so that’s what going on in your head. Makes sense.”

What that says about my own mental state, well, I’ll just leave that to you guys. But either way, Cyrus and C are off into the heart of the Western Expanse, leading us to the final chapter for this episode.

Chapter 2 — Behind the Decadent Visage

Every Party Has a Morning After

Basically, in this chapter we have the hangover of the night before, which shows that even behind a place as insane as the Old City, people go back to normal lives afterwards. A lot of this one actually comes from my college days.

I still remember coming down after a crazy night and finding everyone down at the long tables getting ready for Friday chicken tenders, and that definitely inspired most of this chapter. You’re waking up, everyone is in various states of dress, discomfort, and disrepair, and you kinda wander down through the devastation to share the stories and put off cleaning up for a little while longer. In a lot of ways, that time after the party was more of a bonding experience than the party itself, so I wanted to show a little bit of that here.

And much like with a crazy party, we have the one worst thing of the evening before that we really hope didn’t happen, and constantly try to avoid despite the fact that it’s playing over and over again in our heads.

Trust the Process (Man, What is it with me and late 2010s 76ers humor recently?)

If you were caught off guard by some of the details of BC’s character, and thought “hey, there’s a lot of stuff that we don’t know about her still”, that’s the point. For me, the history of these characters is as vibrant as the futures they will undoubtedly affect, and just like normal people, you rarely get a life summary from them upon meeting. BC, Val, and Cyrus — their stories will unfold in time. And that’s part of the fun! So trust me when I say that if I leave a juicy detail, it’s on purpose.

It took quite a few tries to get this chapter exactly right, especially as I was figuring out who BC is. I knew exactly what was going to happen in this chapter as the looming threat of the machine king began to really throw BC off, and I needed to run BC through a few different set pieces before I found the one that was truly her. With characters, they usually tend to just feel right when they’re acting truthfully to themselves, and BC was a bit hard to wrangle for this one.

You can either leave a comment here or on our midweek Facebook post and I’ll make sure to answer it next week! In the meantime, make sure that you’ve listened to or read:

Chapter 3 — A World All Its Own