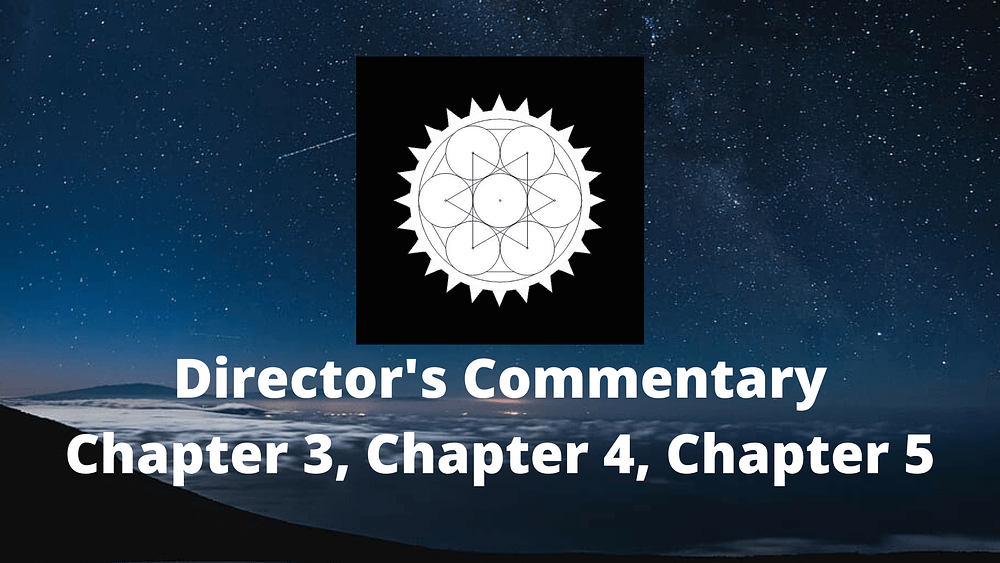 And welcome to week 2 of the Seventh Valkyrie read along and director’s commentary, accompanying the launch of A Slanted Reflection.

You can watch the video version of this blog above.

This is only our second one, so we’re gonna go over a little bit of the format again. First off, new readers beware! I’ll be going over spoilers like nobody’s business, and giving you the inside look behind the scenes of A Slanted Reflection. Fun if you’ve read the chapters! Less fun if you haven’t. So there’s my warning!

I’ll be doing three chapters a week, and starting next week I’ll be posting midweek on social media looking for any questions that I can answer. Promised I’d do that this week, but things got a little crazy!

For this week though, we’re looking at Chapter 3, Chapter 4, and Chapter 5

Chapter 3 — Into the Wild

Still A Kid on the Inside

We really get to flesh out the Western Expanse in this one, which was kind of a geeky dream for me. My fandom of shows like Crocodile Hunter, Jeff Corwin Experience, Planet Earth, and all the many things on the Discovery Channel and Animal Planet are just one aspect of the deep, deep, deeeeeeeeep love and nerdification that I have for wild places and wild animals, and getting to create a whole little ecosystem like this, think about how it all works out, and fill in all of those little details was awesome.

Reminds me of playing dinosaurs with my friends when I was like 6, when we’d argue who was the bigger, badder dinosaur and then just make them up when we ran out of bigger and badder ones.

Voice In the Head

And we also get to see a little bit more from Cyrus and C this chapter. For most of Volume 0 they were just getting to know each other, and now we’ve gotten to the point where they’re starting to get a bit more familiar. At some points, that’s a good thing, but also the honeymoon period has worn off and they’re finally starting to grate on each other’s nerves.

Even as a little throwaway line, we also get our first signs of emotion and intention from C besides “ruthlessly tease Cyrus.” Behind the wave of snark, there’s a definite desire to solve this mystery from his side as well, even a little bit of envy towards Cyrus.

All of this conflict between the two of them is, of course, moot compared to their current predicament in the heart of the Western Expanse, although continuing with the trend of unraveling the many complexities of the forest, we see that not everything in this forest is just trying to eat everything else. Which makes sense. A hyperpredatory ecosystem would be pretty dang hard to sustain on an ecological level.

We also get to see one element of why the Western Expanse is such a powerful, dangerous forest, with the floragons. These creatures, for whatever reason, just emanate force of life everywhere that they go, accelerating the growth of plants, fruits, and foliage enough to support a massive and thriving ecosystem, something that jumpstarts this ecosystem beyond anything that could exist on earth.

And just as these ambling dreadnoughts exist, there are creatures that see the value to them, the armorotts. If you’ve ever seen a Zigzagoon, these are like hybrids between them and normal otters, only much, much larger.

Places, I feel, should always be characters in and of themselves, offering just as much discourse to the story as their human counterparts, and with the arrival of the armorotts, Cyrus is carried off deeper into the wilds of the Western Expanse.

The Longest Chapter Ever (So Far)

In this chapter, I wanted to mirror Val’s experience for you as the reader. When we last left him, he was setting off on the road to Minns, but that feels like a long, long time ago now, and he’s been on the road and brutally tired. Then, as these flashes of the past are all starting to rush back, he’s slogging through an obnoxious checkpoint, through traffic, and then finally into the harsh realization that the Edara he left behind is nothing like today’s Edara.

A few times I played with cutting this one down, but nothing really worked with Val’s determination to just get it done, and so I wanted to share a bit of his struggle to get through and fight through and see this to the end. And as the chapter wraps up, we and Val are sort of left sitting in the back of the wagon, with the knowledge that things are very different, but no real idea of the way forward. A harsh reentry indeed.

The Topography of a Town

The coasts North of Rene are a hybrid of the stark Scandinavian coasts and the winding, rolling hills and mountainside paths of Cinque Terre and Tuscany, which wind through homes and across soccer fields and through little hamlets. This is a place at the very edge of ocean and land, where Oceanus gives the land a relatively stark and hard-cut topography.

Contrast then, the smooth and rolling steps of the New City and you can really see the reflection of the Edaran way of life and the Freelanders. That bizarre mirroring, of a town built around the land vs the town boldly enforced upon it, was actually one of the inspirations of the title A Slanted Reflection, and that difference has existed since almost the earliest iterations of Rene.

A Legacy of Place

Now, Rene actually holds the record for being the oldest place in the Seventh Valkyrie series. I’m not talking in-universe, I’m talking the fact that this place has existed in some form since my fifth grade draft of ShadowStrike. It only became Rene in my first write-through of Volume 1 (the one I ended up scrapping), but even then it had quite a few epic set-pieces. Which ones made it through into Volume 1, and which survived in later forms for future volumes? Well you’ll just have to wait and see about that one.

Now, without going into too much detail, because exploring the Edaran society in all of its forms and functions is part of the series, we definitely get to see a bit of what the Edarans are about. There’s a very distinct undercurrent of xenophobia (which some might argue is healthy) that has hung around since the war and honestly since long before, and also a definite preference for the manmade over the natural.

We also see that the Edarans have a religious deference to the Iron Wolf, their hero during the war seven years prior, and this is where things start to get sticky for Val. For reasons yet to be explained, Val disappeared after the war before eventually arriving with Dark Star in Minns, and it seems that in his absence the stories of his exploits and his heroism have taken on a life of their own.

Literally coming face to face with the result of your actions, which have very clearly outgrown you, is a huge obstacle that Val has to overcome throughout this series.

There’s a Reason I Have a F**king Statue

With fight scenes, I actually draw from the storytelling of pro-wrestling, the techniques and strategies of UFC, and the emotional beats of anime fights. Building a satisfying fight means building stakes, it means having formidable enemies for your hero to overcome, it means having twists and turns you might not see, and it usually means your guy coming out on top, or at least with the hope that he will in the future.

The name of the game is to always leave something to look forward to in the next fight. For example, in this one Val’s set to win, but he’s playing from behind, and he gets stabbed out of fear for his hounds. However, he’s got another trick up his sleeve, and we see exactly how tough he can be.

Lots to look forward to from our Iron Wolf.

Yes, We Have to Eat and Drink

One of the peskiest things as a writer is that your characters need, like nourishment and stuff. So you can’t just shove them anywhere you want to without money or food or supplies, or in Cyrus’s case an important commodity like water. Still, out of challenges come some fun ideas.

With the golden waters, and the river as a whole, we step a little bit closer to uncovering what lies at the heart of the Western Expanse, and what exactly makes this land so full of life. Rather than being generators for the lifeforce and power, the floragons are more like carriers of it, drinking in the water, storing it, and then emanating it out as they walk. There are other benefits to that water-power too, which rains down, seeps into the ecosystem through every place that there’s liquid, and gives everything it touches life.

That’s why Cyrus can hold his breath for a seemingly indeterminate amount of time. And it’s also what allows the things that live in the river to reach truly unprecedented size.

You ever been 5 years old and found a picture of a lamprey when you weren’t expecting it? Well I did, and I wanted to share my horror with all of you. Now they’re the size of two horses, and they have unblinking eyes in a necklace around their whole neck. And they can flop around on the ground like mudfish.

You’re welcome. When Cyrus is struggling to continue on at the end of this chapter, that’s a very, very real echo of fear and horror. I can put myself into the chapter if I really need to capture a feeling, and with this one you better be damn sure I was ready to leave by the time the muckmaw attack finished up.

But, for all that happened, Cyrus pushes on, further into the Expanse.

You can either leave a comment here or on our midweek Facebook post and I’ll make sure to answer it next week! In the meantime, make sure that you’ve listened to or read: