The Road to Volume 1 — Falling into the World

Behind the Scenes, Creator's Corner 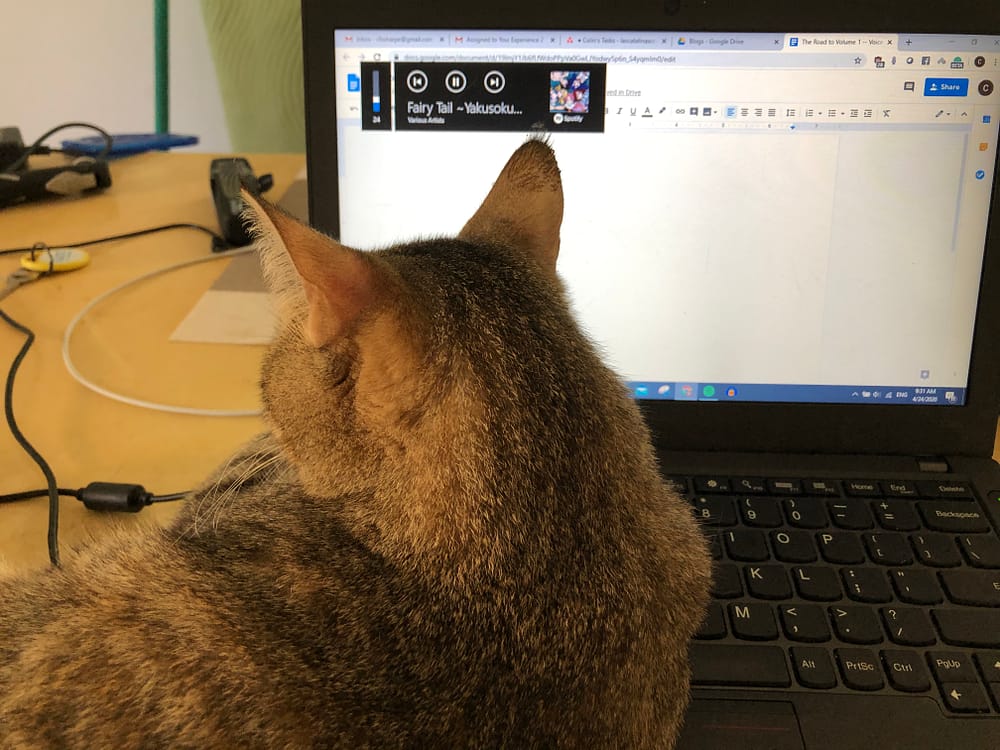 Howdy howdy howdy, Colin again, checking in with another update on the Road to Volume 1. Taking a voice rest day after about 10 hours in the booth yesterday, so no podcast to accompany this particular blog, but I took a few extra photos of my cat, so I hope that makes up for it.

Starting with the 10 hour recording session. God, I LOVE sitting down in the booth and bringing the story to life. I honestly feel sometimes like the writing is just preparing a script, but the telling is when it really becomes the Seventh Valkyrie. I release the book for those who prefer that as a medium, but when it comes down to it I think the Seventh Valkyrie audio form will always feel like the most true form of telling the story.

When I was younger, I used to get so lost in my books and these other magical worlds that would become borderline obsessed with them. I remember back during my first Pokemon phase (the first of many) I wanted so desperately to live in the world of Pokemon, for those magical creatures to be real, to be able to be a trainer and go on adventures like that, that I told my parents to start calling me Ash and that I was going to leave home at 10 years old on my own Pokemon journey.

Even now, I have a bit of a hard time letting go of fantasy worlds once they’re real to me. During my highschool and early college years, I was on a huuuuuuuuuge anime kick (also The Last Airbender, but yeah I get it that’s not an anime screeeeeeeeeeeeeee). I would DEVOUR these series, but as soon as I got close to the end I’d stop watching until I could find another one to get settled into. I was absolutely terrified of a series ending, because that meant that I couldn’t explore that world anymore.

Once particular instance, I got to within about 6 episodes of finishing Code Geass, which is one of my favorite anime of all time, and then I stopped for SIX MONTHS. I couldn’t do it. I couldn’t say goodbye. Then one day, I geared up, I blasted through the final episodes and realized that there was an entire second season. I’m a little bit better now about finishing, but not great. I haven’t read the next few books of Dune. I’ve paused in the middle of book 9 of 14 in the Wheel of Time.

All of this to say that I can absolutely Lose Myself in a different world. Which makes actually voice acting all of these characters in a world of my own creation feel like the ultimate fulfillment to that young character. When I’m telling these stories, I am Cyrus and Val and BC and the Machine King, and all of the other characters that they encounter along the way. I get to live the highs and the lows, I get to dive into the fear and the triumph, I get to be there. I get freakin’ chills. I cry, quite a lot actually. I get so hyped up I’m ready to launch Stardust the cat into the cow pasture across the fence going “Go Stardust, Vruckta!”

I was talking to a buddy of mine, who is coincidentally also named Cyrus, yesterday about why I write this series. It’s not money, because I feel like I’ve seen enough Young Adult fiction to write a half-decent cash grab series, and this certainly isn’t it. Honestly, I have no idea if there even is an audience for this book. It’s a little more focused on wonder and adventure than most of the “adult” fiction, a little less serious and way more ridiculous. And at the same time, it’s got some pretty damn mature elements. I mean come on, BC lives in the heart of a drug-infused brothel. Cyrus and Val definitely won’t escape their own brushes with sex and substance, usually two themes considered off the table for anyone considered even a bit “young”.

What’s more, the idea of selling art has always been weird to me. I feel guilty for doing it sometimes, because I think that art is one of the most magical things you can provide to the world, and it should be so deeply personal and fulfilling that it should be a gift to the world. Obviously I’m getting over that particular hiccup 😉

Back to Cyrus (The Real One). We’re sitting there, we’re noodling on a new site design to really capture people, and we start chatting about strategy, which ultimately comes back to the Why? Why am I doing this, what is the purpose?

And when it comes down to it, it’s kinda so that I can live this grand adventure, and share it with you all. When I step in the booth, I come alive, man. I fire up. I’m in another place, and time just fades away. My foot’s tapping while I wait for my throat to feel a little better so I can get back there.

Here’s a little sneak peak of another cheeky goal. Selfishly, I kinda hope that one day somewhere down the road, this whole series gets picked up as a TV show or a movie series, and I get to sit in the theater and see a few particular scenes from the very end (not telling which, but they currently involve the songs Through the Fire and Flames, Firestone, and Fix You respectively) done right with baller-ass budget. Cause I get so damn hype when shit like that happens, and I want to see them come to life, and draw from a bunch of people who are awesome at filmmaking to see the brain-movie on a big screen, surrounded by a ton of people who will get just as excited as I will.

It’s all to keep falling into that world, and to share that with everyone else.

PS. Currently working on a way to share this series in a better way. I get giddy when people read it and get as excited as I do. Still, working on doing that without a ton of obnoxious self-promotion. This journey is a magical one for me, chasing a dream, and even as I sat strategizing with Cyrus, any time it felt even slightly like we were putting money in front of the dream the joy turned to ashes in a moment.

So I have an idea. If you can think of anyone who might like these blogs, the podcast or might like the series, toss them the link. Volume 0 is completely free so they can get a real big chunk read or listened to before deciding it’s right for them, and I promise you if you like Volume 0, the rest of the series only gets better. I wouldn’t have it any other way.

Thanks to all of you loyal readers so far (which I think is currently comprised of Sharpes, Fizzie, Morro, and me), and to all the readers who continue to read. Love you guys, and hope you love reading this stuff as much as I love writing it.