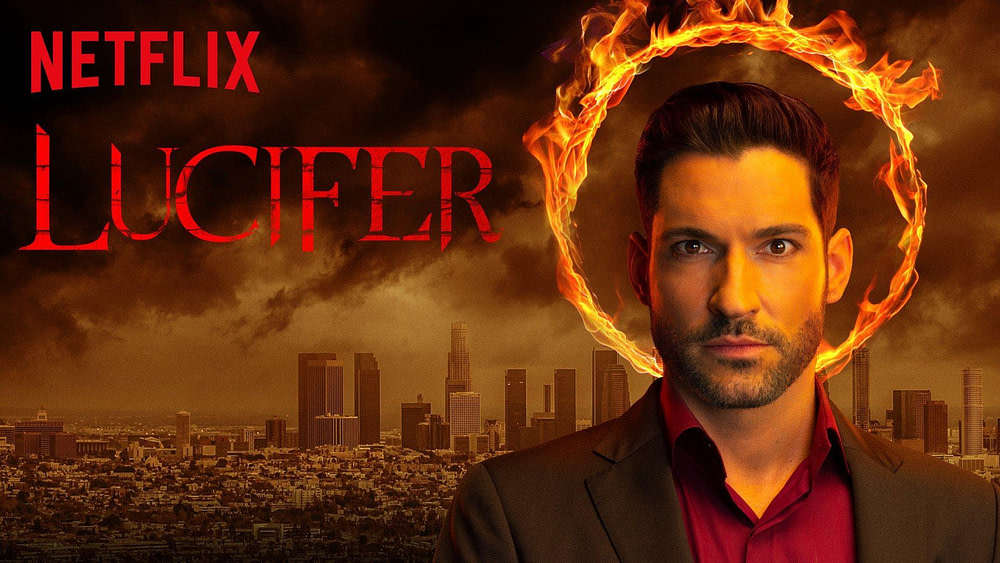 Hey hi howdy everyone! Today I’m doing a Lucifer review. No, not of the concept of the devil himself, the TV show on Netflix! Which is appropriate since season 5 just came out, and I flew through it.

Won’t get into the plot line too much because I feel like this is a story that relies on the mystery a whole lot, but I tend to write these as a recommendation as much as a review.

So if you’re interested, or asking “should I watch Lucifer?” here are my thoughts.

I give Lucifer a solid 5 out of 7 rating, but I will add the caveat that I consumed this show faster than any other show (or album or game or anything!) in a long time.

It’s imperfect, and I know that, but for some reason, it just hooked me and didn’t let go.

Most importantly, I was entertained watching Lucifer. I did my little wogga wiggle frequently (my little dance of joy when I like something I’m reading), and I remember a lot of times where I rewound to see moments over again. And that’s a great thing!

But there were definitely some parts that had me rolling my eyes. The show does occasionally fall into the formulaic crime serial drone. Some of the characters can make up or be angry based solely on plot convenience, and things happen in a contrived way frequently.

Which is why I explained the show as having a side of cheese. It’s cheesy. It’s not a perfect show. But it’s a fun one.

What Lucifer Does Well

Lucifer the character, played by Tom Ellis, is absolutely fantastic, and his constant fluctuation between charismatic, hypersexual prince of darkness and whiny puppy slash borderline SIMP are actually really humanizing.

He’s just so likable and complex, which I only put together when I saw that Neil Gaiman was one of the creators. That mfer can kill it.

His supporting cast is strong too. I love Det. Decker (Lauren German), she plays a great foil to Lucifer and her chemistry with Tom Ellis is one of the strongest parts of the show.

And ultimately, it’s a creative concept that’s just enjoyable. You’ve got so much to play around with, and I found most episodes to be fresh and fun.

In terms of the style, the cinematography is very modern, nothing particularly outstanding. Reminds me of tons of other Netflix shows, especially superhero ones, so nothing special, but it’s sleek and slick.

What Lucifer Does Wrong

I’d say that Lucifer shoots about 85%. Not all of the jokes land. Not all of the mysteries are compelling. Some of the interactions can get a bit samey and quippy, with some over-the-top “CW style” drama sprinkled in

There’s a love story, and I love that, but sometimes it feels like they draw it out endlessly. I had some similar problems with the overall plot, especially season 3 which I think is the longest one at like 26 episodes?

Lucifer suffers from something Community suffered from, which is that the fantastic episodes made it even more clear when there was a meh one.

When it tries to get emotional and dramatic it can creep over into melodramatic, which is where the side of cheese comes in. As for the tech side, the CGI definitely leaves something to be desired.

The biggest one I looked back on for this Lucifer review, ultimately, is that I don’t know that I’d rewatch it.

It leans heavily on teases and mysteries that are rewarding in the reveal, but subsequently make the build just a tad bit tedious.

The Rant | Creating A Compelling Frontman

I tell you, there is just something about Tom Ellis as Lucifer in this show that combines escapism with a character that you can really connect to in a really compelling way.

He gets to be bad, and charismatic, and magical, but he’s vulnerable enough to really like him. He’s effortlessly charismatic at times, but he has these moments of humanity and flaws that show he’s not perfect.

Throughout watching this show, I kept thinking that this character was someone who could not possibly exist as a real human, but because he’s the prince of darkness it makes perfect sense.

He gets to be devilish and strong and brutal, but he does it for a good reason. He gets to be invulnerable and superpowered, but he’s so lonely that he’s worth pitying.

Hell, he gets to sing and dance and be gleeful (with some really fun musical numbers), and then he gets to be terrifying and awe-inspiring, and somehow it all fits. Even some of the character drama that might seem contrived or shoehorned in — the misunderstandings and slipups and pushing people away — they worked.

Because the tropey things that might be utterly contrived for other people make actually make sense because he’s literally not a human and has an entirely different perspective.

For all the show’s flaws, and for all it felt like there were frustrating wrinkles thrown in for no reason at times, I felt like he and also Decker really stayed consistent and true to themselves, even as they changed. Which is really, really impressive.

Looking back, I couldn’t help but think that there’s a reason we’re so compelled by the devil, by bad guys in general, because life is always more fun, and honestly so much more real when there are flaws and sins and fighting.

In a way, Lucifer reminded me a little bit of a Bojack Horseman in that they’re so much more relatable because of their flaws. Lucifer’s there, reveling in his badness, but conflicted due to the fact that he’s an angel at heart.

As someone who creates characters, I thought it was a flash of brilliance to create a character that is so decadent, bold, and charismatic, while also still being so impudent, childish, and selfish, and at the same time honest, caring, and a little scared sometimes too.

In all, really a fantastic character who just drives the show forward. Who would have thought the devil would be so caring and relatable?

The Recommendation | Should You Watch Lucifer?

You know what? As we wind down this Lucifer review I’ve gotta say yes. For all its flaws, I loved it, and I’m stoked to see the final season.

Reminds me of my recent review on Ocean’s Eleven. The show is popcorny. It’s a crime serial with a supernatural element. It’s cheesy, which spread over 13 hours, rather than the 2 or so of Ocean’s Eleven, makes it more pronounced. But it’s definitely got a spin that makes it worth watching.

Final Word: Close to being a list-jumper, because it just goes down so easy, but definitely a worthy show worth adding to the list.

If you liked this Lucifer review, and you think you know someone who’d like it too, spread the word! The more the merrier 🙂