A Narcos Review, And The Magic/Monstrosity of Crime | Seventh Valkyrie Reviews #5 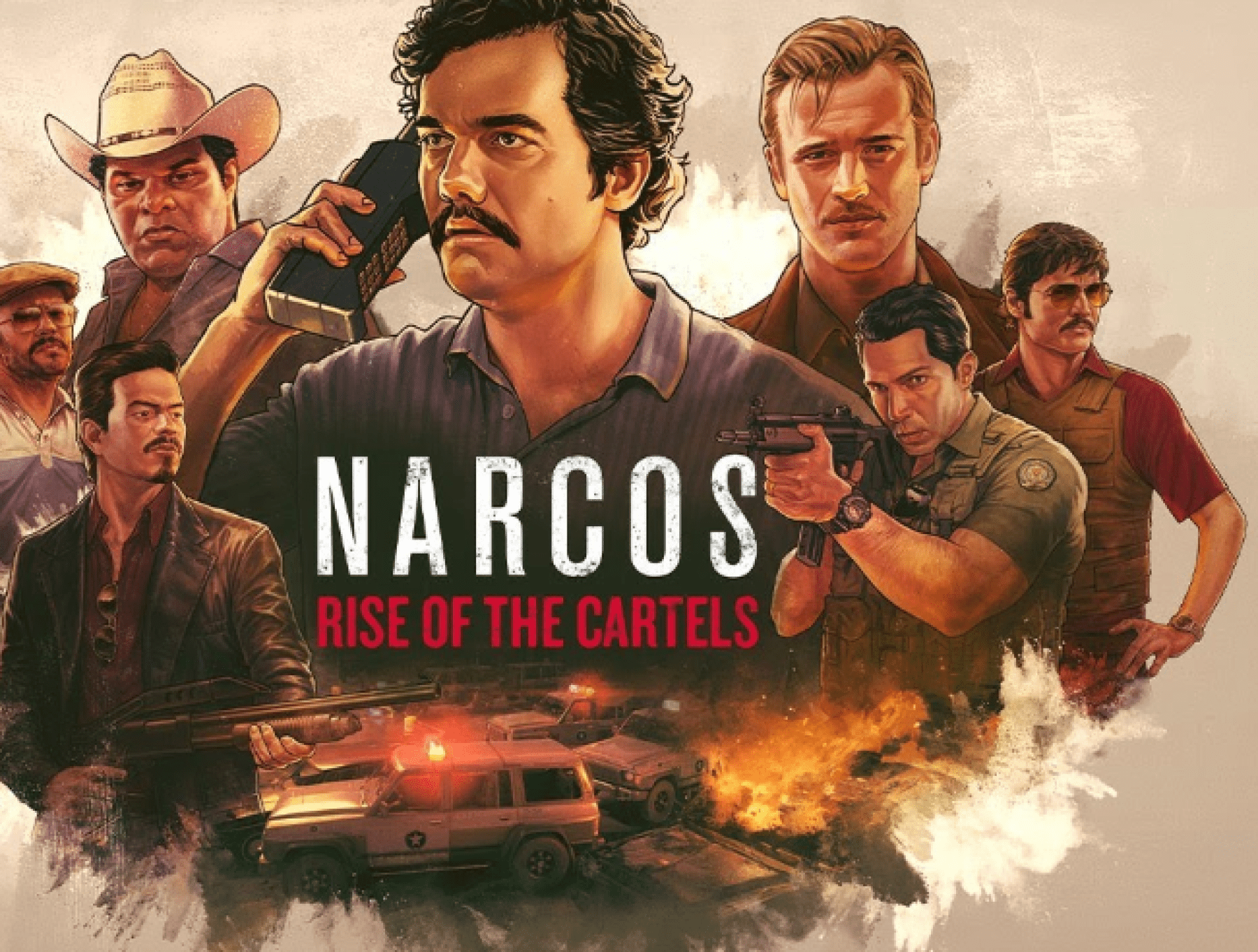 Hey hi howdy, this is Colin, back with another edition of Seventh Valkyrie Reviews. This episode features a Narcos review, and also a rant on how crime shows can bring up so many fascinating questions.

In this one I’m talking about the original Narcos. Not Narcos: Mexico, which I recently started, and I believe both are Netflix originals.

Narcos is a dramatization, so they definitely took quite a few creative liberties. Hell, they even had a video game, which the art above is from. I kept having to stop this show, look shit up online, and gawk at how insane this story really was.

The interweaving of actual footage helps tie the drama to reality, but not too closely. At the end of this show, I thought Narcos was a great example of something I learned long ago, back when reading The Things They Carried.

Sometimes a dramatization can capture the true magic and horror of the world in a way that objective facts sometimes can’t.

It’s interesting, the way that ‘lies’ of fiction can sometimes speak to a powerful truth. A friend of mine commented that they didn’t want to watch the show because it wasn’t necessarily accurate, and told a skewed version of events, I think that’s a valid criticism.

But I don’t look at this show like a documentary, which I would hold to a higher standard of truth. Instead, I found it to be a fascinating example of how compelling and conflicting the world of crime is, especially in the complex world we live in.

I give Narcos a 6.25 out of 7. And there are segments in this show that I would put among the favorites I’ve ever seen.

Particularly the exposition segments! It started from the very first episode, which sets this scene of the rise of Escobar. I got conditioned to get absolutely giddy when I heard the smooth voice of Murphy or Peña come on to explain.

Just that whip-quick way that they captured the movements, subtleties, and stories as they were happening, all intercut with real-life footage was like a beautiful collage. It felt as satisfying as watching How It’s Made, but with drugs and cartels.

The shift to Season 3 is really what gives this show a 6.25 rather than higher. Ignoring the fact that Peña actually had no role in the Cali takedown, the shift of pace was a bit jarring, and the story was a bit weaker.

Maybe it’s because it was Cocaine Inc vs the King of Cocaine. Escobar’s story was raw. It was emotional. It was a story of morality, of a charismatic monster, and a country rising to deal with him.

The Cali story felt a bit less mythic, a bit less personal. It felt like an espionage thriller, and while that was excellent, it didn’t quite capture that raw connection and morality that Escobar’s story did.

Sometimes I like to split things into separate ratings, and if I did I’d split up this Narcos review give Season 1 and Season 2 a 7 while giving Season 3 a 6.

What Narcos Does Right

The presentation and production of this show was absolutely top notch. I’m no cinematographer, but I couldn’t think of a better way to shoot and cut this.

Something about the way they made Colombia feeling like this mythic land, especially in S1-2, was absolutely beautiful.

Then you add in all the exploration of the gray morality. You have complex characters that you can’t decide how you feel about. They make us love evil men, they make us hate good men. And then they show us that those perceptions might be entirely wrong.

And against this near-mythic backdrop, you have the story of a charismatic, intelligent, ruthless, powerful, and engaging gentleman-monster that is Escobar. Whenever he was on the screen I couldn’t look away.

Even in Season 3, where they shift to Cali, the show delivers a crime/espionage/political thriller that was undeniably compelling. It sucks you deeper into this fascinating world, and really explores the more technical and subtle side of the drug war.

What Narcos Does Wrong

There wasn’t a ton wrong in this show, apart from the drop off and tone shift between Season 2 and 3.

I do want to point to the cultural aspect. This was made for an American audience, no doubt, and some of the casting choices got a lot of flak from Latin American viewers. Inaccurate accents in the dialogue, casting actors from other countries.

To be honest, I don’t think I’m the right person to necessarily speak on that issue. Especially against the backdrop of Hollywood and American entertainment’s notorious issues with casting anyone non-white. Still, I’d love to hear opinions on that.

From a technical and storytelling standpoint, I think the major problem I can point out in the show is the drastic shift from season 2 to season 3.

You go from this visceral, raw story of Escobar, the struggle for the Colombian identity. And then switch to this much more businesslike, political, nearly espionage thriller. Sure, after a while, I was able to get into Season 3. But I also took an extended break during which I dropped the show entirely.

It says something about the quality of S1 and S2 though, that an objectively good show in S3 could feel a bit disappointing and different.

I also remember feeling like at some points there were issues with pacing, and a few side stories that didn’t quite land, especially in S3, but I wouldn’t knock points off of the Narcos review for it. Looking at the episode list again, I can’t think of a single episode that wasn’t worth watching.

The Rant | The Magic and Monstrosity of Crime

Now onto the fun part of this Narcos review. This rant is mostly about Escobar’s story, which I found absolutely fascinating and impossible to turn away from.

What I found most compelling about Narcos was that I felt like it cut to some fundamental human nature that felt visceral.

There’s an electric charisma to Escobar, a defiance, and it creates a desire to watch Escobar succeed in some ways.

His story speaks to this darkness that I think lives within all of us in, and I felt incredibly conflicted while watching this show. I wanted to watch this empire rise, I wanted him to trick the corrupt cops, and raise himself to prominence.

But then, slowly, over time, he reveals this nature as a brutal killer, a sociopath willing to do anything for power. Aren’t the men against him the same, I kept asking? Maybe in the beginning?

Something to Chew On

God, I could go on for hours about this show, but I can’t think of any word that captures it better than visceral

I found myself emotionally turbocharged and emotionally conflicted numerous times throughout, and I actually had to stop a few times and really ask how I felt about what was happening.

I think Colombia was feeling that. Heck, I think the whole world feels that way about this whole international drug war. It’s a war at the heart and soul of humanity, and there’s no way to win.

Is crime okay if the laws are unjust? Is violence against criminals justified? Does breaking the rules for justice work if you’re against people who control the government? What is the role of regular people here?

Another word for this show. Compelling. With all these questions, with all these moments, I would challenge you to watch without feeling that spark of intrigue, that ignition of emotion and thought.

I said in one of my articles on writing books that a piece of art’s ‘creative nutritional value’ can be measured by how much it makes you think and feel, and damn, this show made me think and feel a whole lot.

Which, again, is why S3 was a bit soft. Still executed well, still interesting, but lacking the same punch.

So should you watch? Absolutely, yes. Should you watch the third season? I think so, but think of it as an epilogue, rather than a continuation of the story. Standing alone, it’s a great story, and fascinating. But it doesn’t hold up to the masterpiece (one might argue, through no fault of Netflix’s own) that is Escobar’s story.

In summary of this Narcos review, I’d put S1 and S2 right at the top of your watch list, and if you’re still hungry after that, roll on into S3 expecting something a little different, but a lot of the same Narcos you know and love.

If you liked this Narcos review, and you think you know someone who’d like it too, spread the word! The more the merrier 🙂