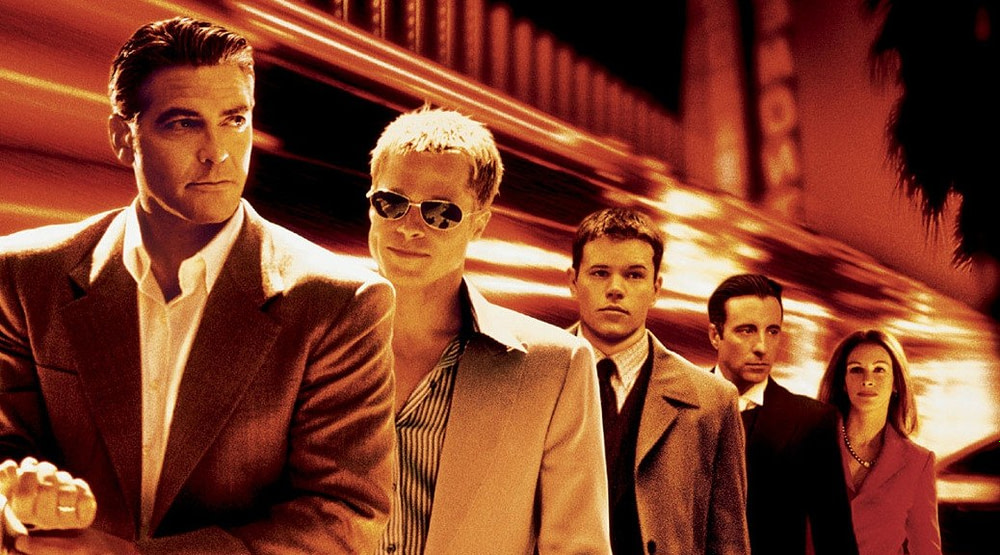 Hello everyone, today we’re gonna be looking at an Ocean’s Eleven review, which to be honest is definitely a touch of a throwback.

A few weeks ago I got the flu (no worries, not COVID), and while I was spending most of my time bedridden I watched Logan Lucky. Then I watched Now You See Me. Then Now You See Me 2. And then I was hooked on heist movies, and I decided to go back to one of the most iconic: Ocean’s Eleven.

Now, it’s really funny to watch this after the most recent season of Rick and Morty where Rick pretty much destroys heist movies, but it’s funny because that episode and my recent binge have just made me love the genre even more.

There’s something to be said for formula, and even though I’m absolutely no good at writing it myself, part of me loves to see it done well. And what can I say, I love a damn good heist movie.

And I mean, come on, everything in this movie is just fun in that early 2000s way. There’s no gray morality. You’ve just got handsome people with lots of money pulling off a plan. It doesn’t challenge you. It doesn’t stress you out. Just fun.

What it Does Well

A good heist movie has likable, unique characters pulling off a complicated plan, a good twist or turn, and a fun ending. And this show literally wrote the formula for the modern heists. I mean come on, it’s such an iconic movie it’s been parodied all over the place, not just in Rick/Morty but also in this fun video.

What It Doesn’t Do Well

The one thing I’d say against this movie is that it’s very, very comfortable, and it doesn’t really push any boundaries. It’s palatable. It’s well-executed. But it’s not really all that original. An excellent example of the heist movie genre, but certainly not all that ambitious.

I’d also say this is definitely a bit of a dude flick, with our only female character basically reduced to arm candy, and a trophy to be fought over. That aspect of the film is definitely interesting, especially as we move ever forward with our consciousness about media.

Does every film need to have a social justice message? Certainly not. Some movies can just be fun, and that’s what this is supposed to be. But this movie is definitely aimed towards a distinct male fantasy of being suave, clever, rich, handsome rogues. And I’m definitely in that target demographic.

Something I like to note in my reviews. I definitely have my own biases and favorites.

In my own writing, I can’t stand sticking too closely a formula. I just get bored. But when it comes to watching, there’s something so cozy about a movie that doesn’t challenge you too much, that follows some familiar beats.

Which is why Hollywood keeps making them. And it’s not just them too, it’s every industry — anime, pop music, books. Some things just work, they just hit all the right buttons, and when we see them happening we react, we can draw from collective past experience.

And somehow, it still feels just as exciting.

When the plan comes together, I love it. When there’s a cheesy romantic subplot, I love it. In anime, when the opening song starts playing in the climactic battle I love it.

I talked about this a bit in one of my old podcasts about tropes, how using the pieces we know in a new way can tap into this greater cultural consciousness and make something more familiar. It just jumps right to that well-trodden path, and it can be easy and satisfying!

That’s one thing about movies (or any other form of art) that really challenge you, that really break the mold. Sometimes I notice with those truly memorable, powerful pieces — especially with new music — sometimes you have to put in quite a bit of time and effort to digest it. Ultimately, it’s worth it, but there’s a front end of energy needing to be expended.

And sometimes, a movie can just be a fun movie.

So should you watch Ocean’s Eleven? If you’re a fan of heist movies, and you somehow haven’t seen it yet, then absolutely yes. If you’re looking for something on a Saturday night at home, definitely.

It’s fun. It’s clever and familiar. And I loved it for what it was. Just don’t expect it to be much more.

If you liked this Ocean’s Eleven review, and you think you know someone who’d like it too, spread the word! The more the merrier 🙂