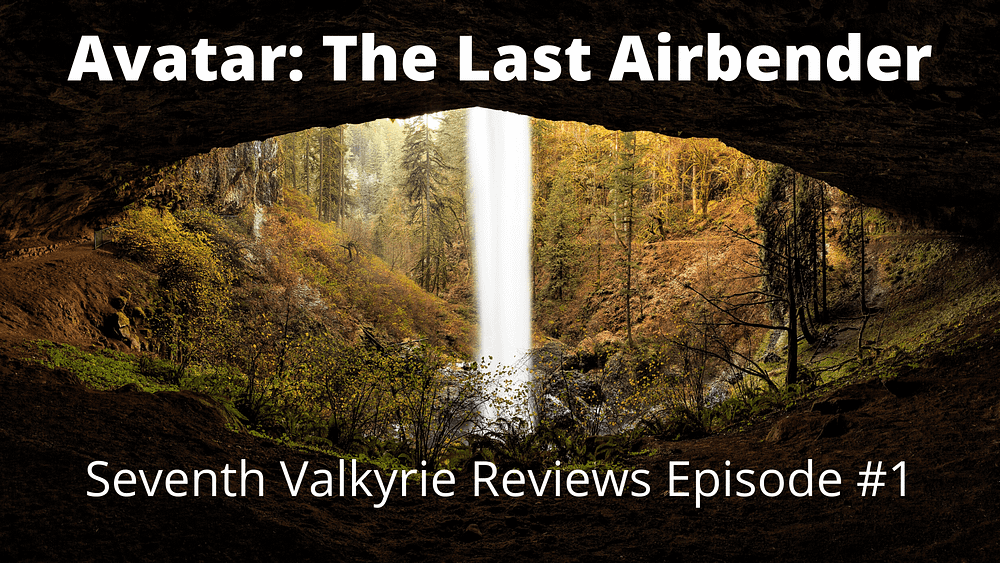 Howdy Howdy everybody, it’s Colin again, author and creator of the Seventh Valkyrie, and we’re keeping the ball rolling with another little segment/blog/podcast on a new theme — a few of my favorites.

Now, the idea behind this segment is mostly cause I love to talk about the shows I’m watching, the books I’m reading, the music I’m listening to, the games I’m playing, and this is a chance to do that in a little bit more depth.

Today, I’m talking about one of the absolutely foundational TV series in my life, one which just came back up on Netflix, and one that actually formed the very basis of the Seventh Valkyrie series (shhhhh don’t tell anyone).

Of course, I’m talking about Avatar: The Last Airbender, a TV series that gets a full seven out of seven stars from my rating scale.

Avatar: The Last Airbender | An Overview and Review

“Water. Fire. Earth. Air. Long ago, the four nations lived in harmony. But everything changed when the fire nation attacked. Only the Avatar, master of all four elements, could stop them, but when the world needed him most, he vanished. A hundred years passed, and my brother and I found the new Avatar, an airbender named Aang. And although his airbending skills are great, he has a lot to learn before he’s ready to save anyone. But I believe Aang can save the world.”

I typed pretty much all of that opening crawl purely from memory. I can literally hear it being spoken as soon as I go over the words, despite the fact that it’s been about 6 years since I last watched the series. Goes to show exactly how much that show has impacted me.

And on the other hand, it’s a really, really damn good opening crawl. Hits all of the major beats the set you up to the story, slams you right down into the world, details the two major challenges (fire nation, and Aang needing to learn a whole lot), and finally lets us know the stakes. We’re gonna try to save the world.

And what follows is 60 episodes of some of the best TV I’d ever seen up until that point, and a show that I still put in my top 5 all time.

A Show “Made for Kids”, But Not Really

It originally aired on Nickelodeon, so there are definitely elements that can tend a bit childish, but when it comes down to it I think Avatar is up there with some of the very best Pixar movies in showing that you can tell a powerful, emotionally impactful, intelligent, and epic story that appears to both children and adults.

The series rarely pulls punches, and it deals with the weight of power, politics, honor, regret, revenge, and heroism in a way that makes it the very opposite of “cartoony”. I mean come on. How many kids’ shows are willing to deal with topics like state-sponsored conspiracies, embedded racism and sexism, and genocide, and somehow pull off a TV PG rating?

And the funny thing is that Avatar manages to deal with all of these topics in a mature, nuanced way, and one that always tends towards the hopeful and the just, rather than just throwing them in to be edgy.

Add in the fact that the animation in this show can be truly, astoundingly beautiful, as well as the expansive and diverse world of epic scale, and you have a show that — even though it originally aired on Nickelodeon — is something I’d still happily recommend to anyone who’s still got the childlike spark of hope in them.

I cannot recommend watching it highly enough, and for that reason I won’t go too much further into the series.

Avatar: The Last Airbender and Me

Okay, confession time: The Seventh Valkyrie can actually trace its lineage back to a bastard child of Shadowstrike, a frustration with the Eragon series, and an Avatar: The Last Airbender fanfiction I started writing in high school.

Yeah. Let that one sink in. I’ll get into my secret love for fanfiction in a different article, but I went to the next level and actually wrote my own, a series I still have the files for called “Rise of the Avatar” that was my take on the story through a more mature lens.

Basically, I was a teenager growing just past the target age for Avatar, and I wanted to find shows and books that had the same imagination, quality, scale, and hope as Avatar while also dealing with stuff I was just getting a handle on, like violence, sex, death, and drugs. Basically, I wanted Avatar, but I wanted all of the training wheels off.

In the ensuing, what, eight years(?), the series has definitely grown and evolved into something with an identity of its own, but you can definitely see a few influences from Avatar in the series if you look hard enough.

The vastness of the world, the presence of some truly awesome creatures, and a little bit in the interplay between magic (which was bending in Avatar) and culture, I definitely appreciate the series for giving some inspiration in that regard.

Another Generation Appreciates the Show

It’s been funny, Avatar has come back into the public eye, showing up on Netflix as opposed to the sketchy anime sites I used to watch it on. It’s been really cool to see people starting to discover the series again on Facebook, and even a few of my friends have talked to me about it in person. Love it!

Except for that person who said that Aang was annoying and put the show down after like five episodes. You know exactly who you are, and you can go to hell.

All the rest of you though, happy watching, and I’ll see you soon!