The Road to Volume 1 — My Setup and Process

Behind the Scenes, Creator's Corner 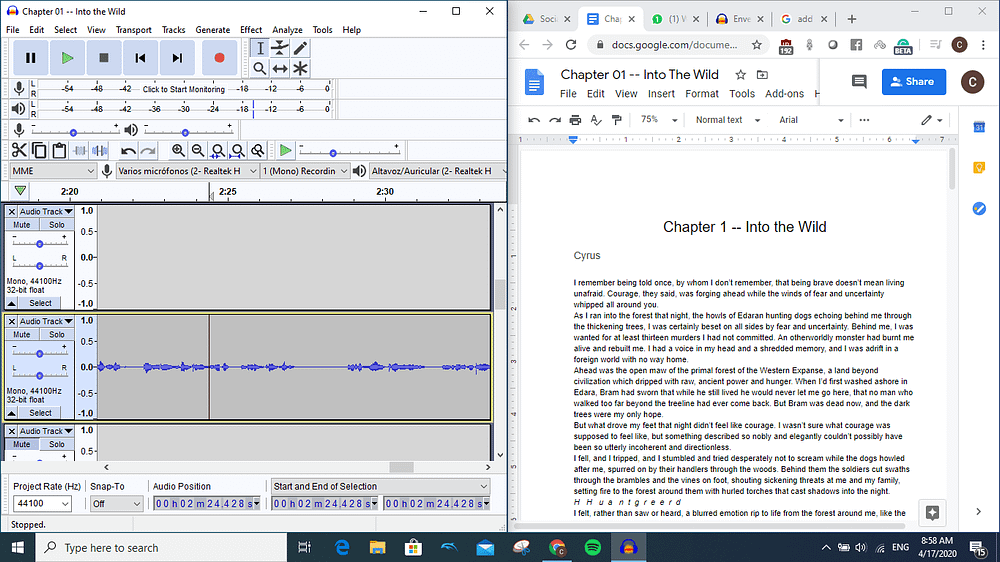 Hello everyone, and welcome to another blog, on the road to Volume 1! In this one, we talk a little bit about my setup and process, from story overview through drafting, editing, recording, and production.

You can listen to the audio version of this blog on the Seventh Valkyrie podcast, complete with brand new improvised theme songs since I lost my old jingle.

As always, I like to do a little life update at the beginning of the week:

Seriously though, drafting is done, and I’m grinding it out, kicking it into overdrive, stepping it up, and aiming for a release sooner rather than later.

For a sense of what “drafting is done” means, I wanted to give an overview of my process.

The Process [No, Not the 76ers Tanking for 6 years]

So, it’s changed a lot over the years, but it always starts with a book Overview

I have a major series overview/outline/list of ideas that I’ve been refining for the past 8 years.

Basically, it’s a series of gates and major events that have to happen within the series to reach the end. Some pieces are more firm than others, some allow for some leeway, and some are just notes like “Omg, I want this to fit to Molly Hatchet’s version of Freebird” or “I Need a Hero(?)”

Then I lay out the major beats for each of the main characters. Emotional points, plot points, basically everything that’s gonna happen to them. Fortunately, again, I have about 8 years of ideas and world building already done, so this is a little easier, but a big part of it is just going freakin’ crazy with ideas.

I do a lot of swimming in this phase, since it’s one of the ones that requires the most raw creativity. I think better underwater, so whenever I’m stuck I just try to beat my freediving record or chill out at the bottom of the pool.

Once I’ve got all of my major beats for the characters, I arrange a general timeline. I like to keep things chronological cause I’m hopping back and forth between characters, so this process is kind of weaving those into an overall narrative to be paced correctly. I also like to find ways to smash the characters together.

In the past I used to go an extra level of granularity on planning and write these really in-depth chapter summaries, but they made the writing feel like work and less fun. So now I just kinda figure out the major points, details, emotional beats that have to happen.

That’s pass 1, and I end up with about a paragraph per chapter of bullet points and notes.

Then, with each one, I draft a chapter, letting the story flow, and discover it as I’m going.

That’s kind of the magical bit. But at the end of pass 2 you have a book… kinda.

That first process is sort of an organized explosion, at which point I have something resembling a book.

Then I take what I call my checklist, things that I make sure every chapter has. Secret ingredients basically. It’ll be different with every piece of writing, but in general I like for things to have a point, some weight, details, and color.

I check through the whole book, making sure that everything is square with the checklist. Then, once I’m happy with the draft, I start recording audio.

Since I’m a one man shop, reading and acting it aloud actually helps me do line edits and catch typos. I’m better at talking than I am at writing, and you pick up on so much more when you’re telling a story compared to writing it.

I record in Audacity (which I think is much better than Garageband because it’s got SUCH a more complete suite of tools. Side note, Garageband is very friendly and shiny, but I always found that they limited you to their little box. It’s a problem I have with a lot of the Apple Stuff. Powerful, incredibly high quality, but keeping you in a box and not letting you really be a power user.)

But yeah, I use Audacity on a window next to the text (as shown at top), and I’m reading through while I’m recording on a Scarlett Solo Studio with a pop filter, which right now I currently have mounted on an unused bike helmet (see previous blog for photo).

In terms of method for recording, I start recording until I mess up or decide that I need to change something or adjust some text or content. As a side note, I actually change things a lot on the fly too during the recording process. Again, I’m a better talker than writer, and I lean towards what sounds better, makes them more natural.

Each time I mess up or stop, I have a clip, anywhere between 15 seconds and 5:30 (my record so far), that I do on-the-spot edits to. I listen back, adjust background noise, cut out breaths, and do all sorts of stuff on the audio at the same time as I’m making adjustments to the text to fit the recording. So as I’m finalizing audio, I’m also finalizing and catching typos in the text. Fun way to edit, especially because I get to live the chapters as I’m editing them, and I get so excited seeing them come to life. That’s a whole nother blog though.

The Process Part 3 [But Really, Should the Sixers have traded Jimmy Butler? Not sure. Al Horford was a bad move I think, but if they can beat the Bucks all of that looks genius. God, Giannis is Great, potential G.O.A.T. if he starts getting rings. What was I talking about? Oh Right, Finalizing the Book]

For each chapter, I then do a second pass aligning every snippet of audio. I adjust the volume levels, make sure that they flow together, and make any final catches of hissing or noise.

While I’m doing that, I’m also doing a second pass to make sure that the text lines up with what I’m saying (and what sounds and reads well). Sometimes I’ll have slight differences between text and audio, so if you notice a few, good job. There are actually small details I think read better than sound, so I reserve some liberty there.

I export, do a little window dressing to prepare the audio or book file for publishing (like adding logos, organizing them into chapters, adding notes to the author and copywriting information, etc.)

But then, the book’s done!

As of right now, I’m done with drafting, and the checklist, and onto recording, which takes a hot minute, but is one of the most exciting parts of the process. Chugging along, and hope to have more updates soon!

In the meantime, you can see how all of this process comes together in Volume 0 (A Fallen Star), which was the prototype for how this process was developed.

Anyway, thanks for reading again! If you want to get updates every time we put out a blog, or just want to keep in touch with major news on the series, you can subscribe below.