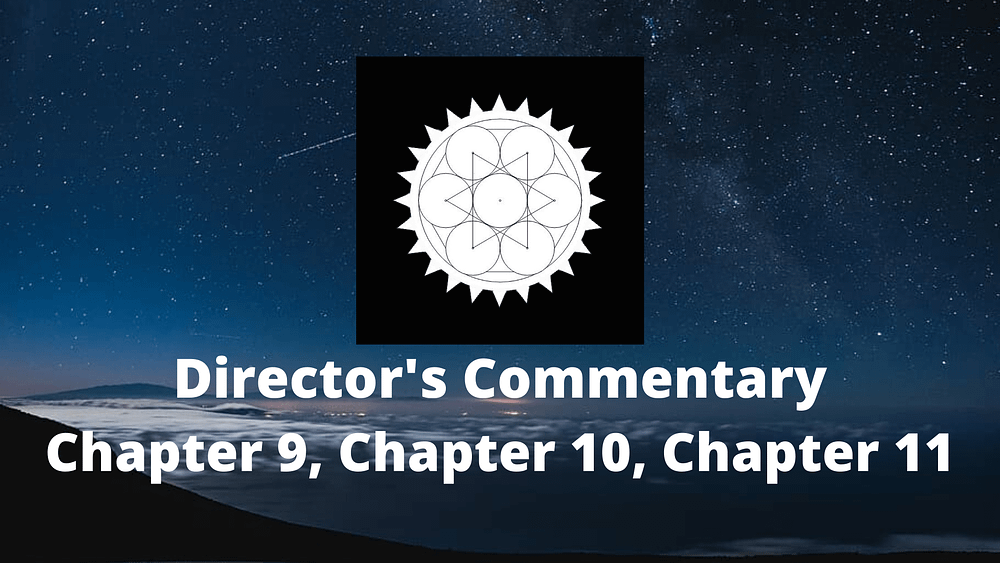 Hey there hi there hello there!

And welcome to week 4 of the Seventh Valkyrie read along and director’s commentary, accompanying the launch of A Slanted Reflection.

You can watch the video version of this blog above, or if you’re more of an audio listener you can check out our podcast. In both versions, I go into quite a bit more detail.

As always, new readers beware! I’ll be going over spoilers and giving you the inside look behind the scenes of A Slanted Reflection. Fun if you’ve read the chapters! Less fun if you haven’t. So there’s my warning!

Chapter 9 — Among the Twisting Streets

This is the first chapter that I wrote from outside the perspective of the three main characters, and that’s something that we’ll be seeing pretty steadily on occasion throughout the series. I don’t expect them to be that frequent of recurring contributors, since I feel bogged down when I’m reading a series that has like 1000 narrators, but I really like getting to step out of our main characters on occasion.

One thing that I’ve always kinda thought about is the fact that the closer you get to a hero, the more you see their human side, and with that increased familiarity, you have a decrease in the sort of “mystique”. It’s an old adage that in horror movies, something is scarier the less you know about it, because it’s the unknown. I think that’s also true for heroes. The less we know about people, the more mysterious they are, the more they can kinda become these legends.

A big part of this series is the humanity behind legends. If you think, right now, I’m sure you can think of tons of people in history or present day that have reached legendary status. But each of them was a person. I remember, I was watching The Last Dance, the Michael Jordan documentary, and it was fantastic how they were able to move from this intimate look at the man behind the myth, and still explore the mystique behind this legend.

Getting out of Cyrus, Val, and BC’s perspectives gives us a chance to remember things kind of the opposite way. We know them intimately, and then every once in a while we get to see them from the outside, and see exactly what they mean to the people around them.

I’ll probably do an ‘on writing’ bit going into a bit more detail on this idea.

An Introduction to Strena

I’m a 23 year old man, and yet I feel like I connect with a 9 year old Extranatural girl named Strena more than almost any character in the series. I think it’s because, at least of all of our narrators so far, she’s still the most wide-eyed and pure. She’s curious about things that it’s fun to be curious about, to the point where she gets herself into trouble. She’s scared at things that are scary. She loves Goobah, a dumb, bouncy owl thing, for no particular reason. She follows someone strange and terrifying just to help them, and then heals them without a second thought.

When I’m acting like Strena (as my neighbors will tell you happens a lot), I feel like I’m at my happiest. Because despite a scary world, Strena still has that childlike joy, that spark of curiosity and love and happiness that’s a wonderful thing to tap into.

Volume 0 had a very Edara-centric view, with the freelanders very much as the ‘other’, but throughout this volume we get a deeper look into the structures and systems of the freelanders, not just in the Old City, but around the continent. There’s a strong aversion to rulers, and a powerful spirit of independence, but sort of an unspoken unity in the face of the most prominent threat to freelanders — Edara.

I imagine that the strange way in which the freelanders unite against the Edarans is a big part of the reason that Edara is so afraid of them. For lack of a better comparison, it’s a bit like the Vietnam war. The freelanders don’t have the population or organization to stage a massive war and conquer the Edarans, but when pressed, and fighting on their own terms, they’re very dangerous.

I tend to think of writing, any form of art really, as a soul-to-soul connection. There’s something that I feel/think/care about, and I want to share it with you. The medium that I choose gives me a bunch of different ways to do that, whether that’s film, art, music, sculpture, writing, sport, etc. forever.

As a result, I love to have some more experimental or ‘style breaking’ chapters like this one. In the past decade I’ve probably watched more TV and movies than I’ve read books (gasp! scandalous), cause I was spending so much time writing that I’d get tired of reading. A funny turn of events, but one of the things I loved from shows was their episodic nature. Within the same overall universe, characters, and arc, you could tell a different story with each episode, and make each one drip with quality and love, get totally weird and experimental. Manga is actually a great example of this too. So every once in a while, I like to find chapters and paragraphs and sections to really break my trends and spice up the style.

And it’s funny, I definitely don’t stick to one specific style throughout the book. Sometimes I try to tell it like I’m one of my characters telling the story. Sometimes I like for it to be like you’re watching a movie of what’s going on, and then sometimes, I like to get really wild with it, and try to go so deep that you feel like you’re experiencing the story too.

No real plan, no real strategy to it. Just following the voice of the art!

A side note that I liked about this chapter, is that we finally get to see a bit of edge underneath the very fluffy and soft exterior of Cyrus. He’s very innocent, and very naive at times, and has spent a good deal of time running and hiding and afraid. So it’s good to remember that he’s got a little grit and spine too, and a little cut to him when he’s ready to go.

Where will this young Valgardian lead us? Only time will tell. But no one lives a life like his and comes out unscathed or unchanged.

Speaking of times when I wanted to show characters from the outside, Strena gives us a perspective of Val that he couldn’t possibly give us, and that is the impact that he leaves on the world around him. He’s a man like no other for certain, and through Strena we can see that literally.

A World of Magic

I hesitate to call the Gifts of the Extranaturals magic, because there’s very much a system that it operates on and it’s a physical force within the world of Edara and beyond. But it’s a force that definitely doesn’t exist in our world, so to us that’s a pretty good description.

Through Strena, and into the healing of Val and the hounds, this is really the first time outside of fights that we see how much Gifts change the world. On the edge of death, beaten down, shoulder torn apart, and hounds struggling to survive, Val is rejuvenated by the effects of Strena and Rama. The hounds are thrown by this as well, since they’ve never seen someone with the wildspeech before, and definitely not this level of healing.

And so the worlds of Edara and the freelanders become more distant still.

When I was young, I was always enthralled with the idea of good and evil. Like there were bad guys, and good guys, and especially during war it was very clear who was who. I remember being very young during the second Iraq War, and being somewhat confused as to why everyone was confused, and arguing about it.

And then as you grow older, you (hopefully) start to see the many shades of gray that exist in war. We know that Val is well intentioned, and just seeking to wipe out an enemy, but the freelanders are rightfully nervous. For self-preservation, they very well might have been better off throwing Val back in the river.

And yet, against that, you have another childish perspective, that those who are hurt should be healed, and in a time of indecision, that small, childish desire and intention triumphs, and Val is healed.

You can leave a comment here and I’ll make sure to answer it next week! In the meantime, make sure that you’ve listened to or read: