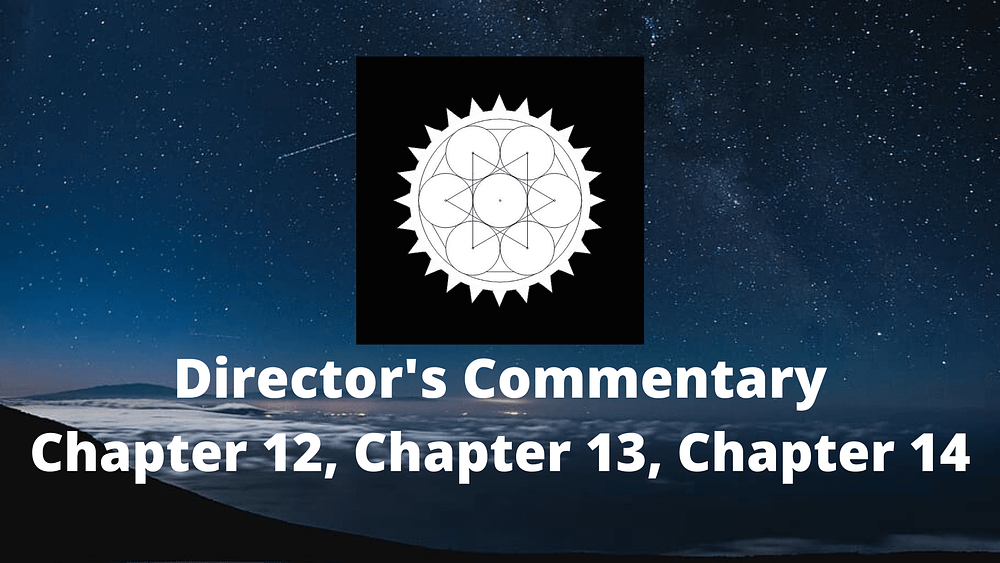 And welcome to week 5 of The Seventh Valkyrie read along and director’s commentary, accompanying the launch of A Slanted Reflection.

You can watch the video version of this blog above, or if you’re more of an audio listener you can check out our podcast. In both versions, I go into quite a bit more detail (and you get to hear my lovely voice!).

If you don’t know by now, new readers beware! I’ll be giving you the inside look behind the scenes of A Slanted Reflection, which comes with spoilers. Fun if you’ve read the chapters! Less fun if you haven’t. So there’s my warning!

As the rains stop on Cyrus here, and the chromatic mists settle around him, he’s stepped even deeper down the rabbit hole, and into a realm at war with itself. We touched on it briefly in the previous chapter with Cyrus’s dream of the awakening hunger, but there are ancient, fundamental forces at play here that manifest into the war of gold and black that divides the very shape of life here.

I liked the parallel between the more grounded, human struggles Val and BC are facing in Rene with the very Man vs Wild style story that Cyrus is dealing with. Each has a very different context, where the struggles in Rene are held finely on the edge of a knife, and the conflict for Cyrus is broad strokes on a scale far beyond anything he could possibly affect.

We also see the first touch of the corrupting chaos oil here, and the creatures to which it gives rise. Now, the actual nature of the chaos oil, where it comes from, and what role it has to play in the series will be revealed later, so instead I’ll touch a bit on the inspiration for the animals.

Sheer terror and disgust. I practically close my eyes when I’m writing these sections. Something about those deformities, those twitching parasitic limbs just gives me the heebie jeebies, so I thought I’d share that experience with all of you. Seriously, thinking about them makes me start to itch. I think that feeling comes from our natural tendency to understand creatures’ forms, so to see something so corrupted and twisted is very disturbing.

One detail that I wanted to touch on was the response that Cyrus has at the end of the chapter. In Chapter 10, Cyrus notices that the opposing forces of the hunger, natural and unnatural, chase after each other. Early in this chapter, we notice that the carp goes out of its way to tear apart the python, and all of the creatures in the churning fork of the river are striving to eliminate each other.

It only makes sense that Cyrus, as an animal that is exceptionally connected to the world around him, would be caught by that instinct as well.

An Introduction to Pors

I talked in the last episode about introducing Strena, and how much I liked having an outer perspective to write on the characters. There’s another reason. It’s just so much fun to write other people on occasion! It’s kinda fun and improvisational, it’s a process of discovery that I get to go on. Especially if there’s groundwork laid already.

Moreso, we get to see BC from the outside for the first time in this chapter too.

Wouldn’t She Be Impaired?

If you’re wondering why BC seems at times to be crystal clear lucid despite her near-constant consumption of alcohol, you’re right to do so. BC has a real, real wicked tolerance, plus the experience of being intoxicated so frequently that she’s got a ton of training on how to perform even when under the influence. I’d like to say that this is a fictional concept I came up with, but it’s actually a very common occurrence for heavy alcoholics or stoners.

Just more signs of exactly how much substance is a presence in her life.

Operations and the Rasmus Pact

Another thing we get to do in this chapter is see a little bit behind the curtain at how the Pit (and the Old City) operate. Much like pulling behind the scenes to see the hangover after the big party night at high season’s end, there’s a very simple, but at the same time cohesive and organized way that the Old City has come together and maintains everyone’s interests.

It’s a similar sign of the cooperation and unity that occurs between the peoples during “Among the Twisting Streets.” These are starkly independent people, people who regularly fight, even kill each other, and especially among the crime families would not hesitate to order the deaths of possible enemies.

But against the common threat that they all share, Edara, and now the Machine King even these vastly different people with incredibly different cultural backgrounds have a reason to come together.

As another note, this is definitely not the last time that we see the influences of the four families of the Erasmus Pact. I’m a big fan of starting with the tip of the iceberg and working from there.

And The Other Side of Crime Families

Speaking of large objects that move silently and powerfully, even among the Pit crew there’s a definite understanding that the big dogs, the four families are dangerous, especially once the Machine King’s name is brought to the table. The four families are big fish. They are unchallenged in terms of raw power (except by each other), they’re surrounded by small schools of supportive fish that swim alongside them, and they have bigger concerns than their remoras.

The Machine King, though, is like a living embodiment of the terror of the ocean. He is the darkness that swallows up what it desires, and though he’s never seen, there are certainly stories, and calls in the night.

For the big fish, that’s not something they’re used to. And for the small fish swimming alongside, all of a sudden their bastions of safety aren’t so safe anymore.

Yayyyyyyyy! Val and BC meet in this chapter! It’s our first time two characters have interacted! And just like you’d expect, they ABSOLUTELY do not get along well. OOOOOOOOOOH boy I’m excited to finally have all of my main characters interacting with each other, because that’s such a huge part of this series. No spoilers though, I’m just super excited.

This is also the record within the series for most narrators in one place. Val, BC, Pors, and Strena. Stick that one in your trivia game!

If you haven’t had a chance to listen to the audiobook, I’d recommend it almost based on this first passage, which is some of the best voice acting I think I’ve ever done. Just the sheer, raw emotion of Cyrus comes bleeding through even better in the story version, and it was all recorded in a single take on the first try.

Sometimes the magic just takes over.

And Into the Action

Looking back at this chapter, I really like how it turned out. Short, compact action, with a very clear set of stakes. Cyrus vs the Corrupted Wolf. Our hero completely outmatched and desperately looking for a way to survive. Narrow escapes. Twists of fate. Some grinding, crushing, gooey grit as they enter the river, and the stillness punctuated by the trident spines of the beast that lays in the basin.

When I came out of the booth on this one, I was exhausted and exhilarated. Did a few fist pumps, told the neighbors, spun my cat.

And Even Deeper Into The Wild

He’s evaded the muckmaws. He’s escaped the python and the raptors and the wolf. He’s dodged the basin beast. And then there’s an enormous wolf. Our boy just cannot catch a break, and at this point he’s so far beaten and broken that he has nothing left to do, no strength to fight, and all he can do is let himself be carried into the heart of the wild by a force that he can’t outthink, can’t outrun, can’t outfight.

The forest, it seems, finally swallowed him up. But it’s not over yet.

You can leave a comment here and I’ll make sure to answer it next week! In the meantime, make sure that you’ve listened to or read:

Chapter 15 — As the Evening Falls

Chapter 17 — Shadows on the Roofscape