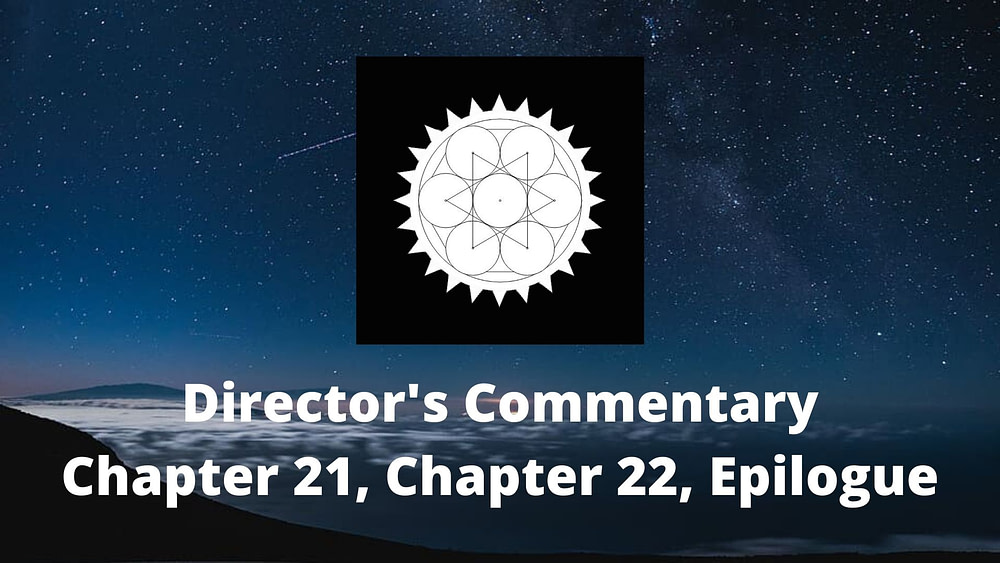 And welcome to week 8, the final week of The Seventh Valkyrie read along and director’s commentary, accompanying the launch of A Slanted Reflection! We’re finishing up today, and I’m geeking! Can’t believe we’ve gotten through this full series, and I’m stoked.

For this week, we’re looking at Chapter 21, Chapter 22, and the Epilogue! It’s the end for Volume 1, but that doesn’t mean we’re gonna stop coming out with Seventh Valkyrie content. Keep an eye out for more cool stuff to come from the world of the Seventh Valkyrie.

As always read or listen to the chapters first! I’ll be giving you the inside look behind the scenes of A Slanted Reflection, which comes with spoilers, and we’re reaching the end of the book!

You can watch the video version of this blog above, or if you’re more of an audio listener you can check out our podcast. In both versions, I go into quite a bit more detail (and you get to hear my lovely voice!).

Swaying Between Dreams and Realities

For BC, this time in Rene was an escape, almost a dream from what had come from before. And now, as the Machine King closes in, she’s forced to face the harsh reality that comes when she wakes up, to the world that she tried to leave behind three years ago.

For BC, a central theme is the concept of escape and reality. She flickers between these dreams and nightmares that, to now, have never truly solidified into anything truly meaningful. Drugs, alcohol, sex, violence, it’s all been shiny windowdressing on the true problems hiding beneath.

But you better be damn sure that as these dreams end, BC will have a thing or two to do about it.

The Machine King’s voice was one that I fought with myself for a long, long time about. He’s gone from outright evil to completely insane to deranged to menacing to ominous, but none of them felt completely right. I think it’s because we live in times where the villains we face hide behind just causes, behind sweet words and semi-convincing logic. The bad guys don’t reveal their plans anymore. They try to confuse you, convince you, batter you, make you think you’re going crazy. They try to control you, suck you in, and use you. And at times, they can even be tremendously likeable, easy to appreciate, and it’s only through vigilance that you beat them.

And that’s what the Machine King’s voice came from. He’s demeaning and belittling but sweet and comforting. He makes you feel small, and powerless, and he makes sure that you know he’s not kidding.

I know we’ve only seen bits and pieces of him, shadows of his intentions, stories of his power, and that’s intentional. We will get to see more of him.

Especially as he makes his move at the end of this Volume, with a full out attack on the people of the Old City.

I mentioned last week in my chapter on Cyrus and Aeritihim that love to show the power of characters by their effect on other characters. Cyrus nearly turns to mush, and collapses at a quirked eyebrow.

And now, the only thing capable of getting Rat off of his game, frantically summoning his men, is the slightest possibility that Val might be the Iron Wolf.

A sense for the legend, and how it has grown on all sides of the continent.

Where the Myth Becomes Man

Much like for the Edarans, the story of the Iron Wolf of Edara has far outgrown the man. So when they hear his voice, rather than a storm of angels coming to kill them all, they almost get cocky.

And then the door rocks. And even though the stories exaggerated, they’re still faced with one of the most dangerous warriors Edara has ever produced.

A Heart of Steel

One detail I wanted to highlight. Not once in this chapter is Val referenced as Val. In this chapter he’s truly the Iron Wolf, and the distinction between the two is very, very important.

Val is hard. The Iron Wolf is harder, and in the face of a threat like the Machine King he’s forced to shed more and more of the elements that keep him as Val, as he gets ready to face the war.

But how far do we go in the sake of a cause before we’ve gone too far?

Another One of the Oldest Scenes in the Series, Last One from the First Draft

This fight is the last scene that still exists from my very first draft of the Seventh Valkyrie, at least spiritually. Aerithim (back then he had a different name) vs the corrupted wolf for the fate of the forest. It was always going to happen to cap off this section, although I actually had BC involved in the original one (along with a few other characters).

Hope that’s not touching too much into potential alternate timelines, but I thought that was another fun tidbit of information.

It has changed a great deal since then, including the significance of the fight, why it happens, what it means to the series as a whole, and very much so for the better, but what can I say. I love an epic battle every once in a while.

The Touch of the Stars, and the Resonance

I mentioned last week also that I was really glad to be able to connect ancient history, and grand concepts, to the now of the story, because I think that adds so much weight to moments when you do it right.

And you have this beauty of the fallen star, of the lake far beyond any depth, with some force beyond us all beating at the beginning of it.

And speaking of those of the wolves, did I get ya? M Night Shamamalama (Shyamalan) talks about a concept called “the inevitable twist”, and it’s something that I try to keep in mind. When you see a twist, or a surprise, it should feel like the last piece of a puzzle falling into place. Everything should click. And it should feel rewarding, like you can walk back through the scenes before and go “of course!”

I think pro-wrestling actually does this really well. When it comes down to it, each match has a winner and a loser. But how you get there, and the doubt in your mind while you watch the match, that’s what builds the excitement. Because if you build two possible paths, you create tension between the two, and you can keep the audience guessing. At least for a little while.

I had a luxury of this being our first epic battle to play around with some expectations here. In most fantasy series, the good guys show up to beat the bad guys always. But as we saw in Volume 0, things don’t always turn out well for our heroes. People die.

With Trisden’s defiant roar, you could actually go multiple ways. It would be a fitting end for him to go down swinging. It would reinforce the fact that this is a dangerous world. And it is.

But the Full Moon’s Guard arrives. Not perfectly on time. But soon enough. And the rest is history.

Sound without Soundtrack, Surprise in Text, and Creating Epic Moments

This was one moment that I saw, heard, and felt. The challenge was building those sensations, bringing you into that powerful moment without needing to tell you.

I wanted you to feel the anticipation as Aerithim arrived, slowly stepping out onto the lake, and I hope I did a good job. This scene will go awesome, I hope, if we ever get a visual adaptation.

And Rene, as well as the world beyond it, will never be the same again.

And That’s a Wrap!

Wow, can’t believe that the director’s commentary has been laid to rest! I hope you guys liked these, because I know I certainly enjoyed doing them. If you have any questions, as always you can respond with a comment here, message us on Facebook. I’ll try to answer any overall questions you may have (if I get any) in a follow up post.

In the meantime, the next few weeks we’ll be filling out “The World of The Seventh Valkyrie” with a boatload of content from Volume 1. I’ll also be continuing my review series, and mozeying on with Creator’s Corner. And then who knows what happens next!

I’ve got a timeline for when I’ll start writing Volume 2, and the pieces are already coming together. But I don’t want to disappoint anyone so you’ll just have to wait for more news on that one!

Thank you for joining me on this journey, and thanks for being such wonderful people! Hope you loved Volume 1, A Slanted Reflection, and I can’t wait to share some more of this adventure with you.

And for the final time in these Director’s Commentary, stay safe, and in the words of Bill and Ted, be excellent to each other.